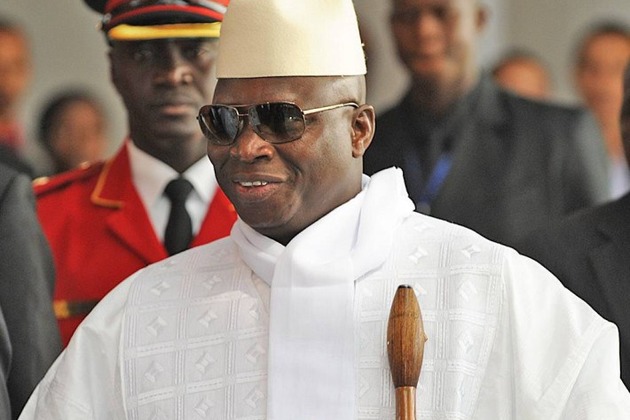 BANJUL, Gambia - After being in power for 22 years, Gambian President Yahya Jammeh was handed a shock defeat in the presidential election from Adama Barrow. Jammeh accepted his defeat and announced his decision to step down after he obtained 212,099 votes against Barrow's 263,515 votes.

After conceding defeat, he said, "Gambians have decided that I should take the backseat. You have voted for someone to lead our country. This is our country, and I wish you all the best."

Jammeh seized power in a coup in 1994. Since then, he has ruled the tiny West African country with an iron fist crushing dissent by jailing and torturing opponents. However, Jemmeh said he would help Barrow during the transition and said he would be willing to work with him if felt the need.

Barrow, a former security guard, never held any public office despite being active in local politics. During his campaign, he pledged to appoint a transitional government to work for the people.

Karamba Touray, a spokesperson for Barrow's UPD, said Barrow would "stop plans to leave the ICC and ask to rejoin the Commonwealth immediately."

He also said the new leader would void Jammeh's declaration of Gambia as an Islamic republic.

Touray said, "He wants Gambia to remain a secular state and respect the rights of all the people."

Following the declaration by the election commission, many Gambians stayed up all night, while some of them tore down Jammeh posters despite, presence of military. Many of them rode through trucks on the streets of Banjul chanting "Freedom! Freedom! Freedom!"

Jammeh forced many Gambian leaders to political exile. For them, the result was more than victory as they never anticipated Jammeh's fall.

Gambian activist Pasamba Jow from Washington said, the election was a 'great victory' for the entire African continent but he accepted that it was 'difficult task to rebuild the country and healing the nation.'

Gambians believe a peaceful handover of power will be exemplary as African leaders have been accused of rigging polls and fudging constitutional laws to extend their terms.

Lamin Joof, teacher based in Banjul said, "African heads of state if they are defeated should take the example of Jammeh by leaving office honourably."

Omar Amadou Jallow, an opposition leader for the People's Progressive Party, which backed Barrow's coalition said, "We are happy to be free. We are able to free the Gambian people from the clutches of dictatorship, and we are now going to make sure Gambia becomes a bastion of peace and coalition. Our foundation will be based on national reconciliation."

He said, "The United States looks forward to being a strong partner in efforts to unify the country."

Human rights activists have accused Jammeh of jailing and killing of thousands of opposition leaders, journalists and LGBT community during his tenure.

In 2009, he detained several witches and sorcerers blaming them for his aunt's death. The detainees were forced to drink a herbal mixture that made them hallucinate. Amnesty International claimed that they were tortured and severely beaten. In 2012, he said he would execute all 47 prisoners but later the firing squad spared 38 of them.

In April, following a small protest, dozens of people were arrested including a UDP leader Ousainu Darboe. Two of the arrested UDP members later died in custody.

Opposition's Diab said, "I want him to face justice, they have to make sure he faces the full wrath of the law. People have died; many of us don't know where our family members are."

He also cut all internet connection and phone service on the Election Day to avoid unrest but the service was resumed afterwards.

One of the lessons the current coronavirus pandemic has taught us is that we depend on electronic devices more than ...

Demand for oil may have peaked

PARIS, France - Although crude prices have rebounded from coronavirus crisis lows, oil executives and experts are starting to ask ...

Nationalism an earth-shattering trend in shaping economies of future

Former U.S. Treasury Secretary Lawrence Summers has recently conceded: "In general, economic thinking has privileged efficiency over resilience, and it ...

A million Russians predicted to declare bankruptcy in coming months

Moscow [Russia], July 4 (ANI): As countries across the globe have been facing the worst collective economic downturn since the ...

North Dakota pipeline supported by Trump ordered to be closed

A U.S. federal judge ruled Monday that a controversial pipeline that runs through Native American lands in North Dakota be ...

Yair Netanyahu making name for himself at home and abroad

JERUSALEM - As scandal-plagued Prime Minister Benjamin Netanyahu stands trial for corruption, his 28-year-old son has emerged as a driving ...

WASHINGTON, DC - Broadway actor Nick Cordero, aged 41, has passed away after a long battle with coronavirus.According to Variety, ...

WASHINGTON, DC - The novel coronavirus is continuing to spread in the United States, particularly in the western and southern ...

Philippine government to offer jobs at home for returning Filipinos

ZAMBOANGA CITY, Philippines July 5 (PIA) - The returning Filipinos who arrived Sunday in the city from Sabah in Malaysia ...