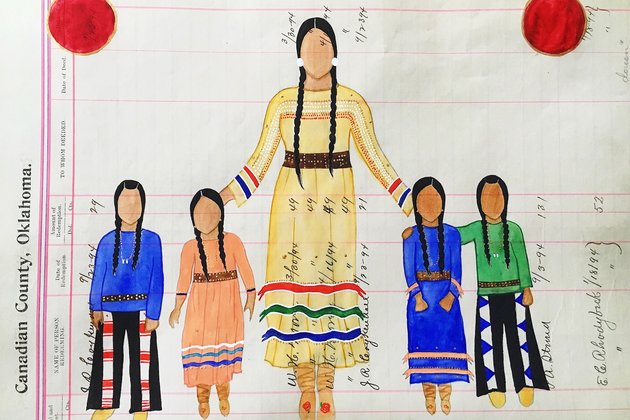 WASHINGTON - A group of Native American women from several tribes in Oklahoma have launched a nonprofit organization they're calling the "Auntie Project: Native Women of Service."

Their goal is to help indigenous kids in need, beginning with child migrants crossing the U.S.-Mexico border.

The idea came to them in June, after hearing that the U.S. Department of Health and Human Services' (HHS) Office of Refugee Resettlement (ORR) would move 1,400 unaccompanied migrant children to Fort Still, a U.S. Army post near Lawton, Oklahoma.

"And it struck a nerve in all of us," said Amanda Cobb-Greetham, chair of the University of Oklahoma Native American Studies program and a member of the Chickasaw Nation.

Built in 1869 on the ancestral lands of the Kiowa, Comanche and Apache tribes, Fort Sill was the site where several Chiricahua Apache prisoners, including about 50 children, were "dumped unprotected" in the autumn of 1894, among them Chief Geronimo, who died there in 1909.

"In fact, there were Native peoples born in captivity in Fort Sill even after Oklahoma statehood," Cobb-Greetham said. "And there was an Indian boarding school there, for many, many years - that really tapped into our own and our families' history as boarding school survivors."

The Aunties, like Native Americans across the country, understand the trauma children suffer as a result of being separated from family and home.

"And we told ourselves, 'If indigenous children are going to be at Fort Sill again, wouldn't it be something if this time around they had some aunties looking out for them?" Cobb-Greetham said.

Her invoking of the term "indigenous" reflects the view of many Native Americans that migrants from Latin American countries are "family."

"But I'm hearing it more and more from Native American activists who say that before the Europeans came, we were all indigenous people, so there's that shared history of kinship," Leza said.

It is not known what percentage of migrant detainees are indigenous, but a 2015 report by U.S. Immigration and Customs Enforcement said a number of detainees speak only indigenous languages, and other reports suggest ICE authorities have difficulty providing the translation services required by law.

HHS in late July announced it was holding off on plans to send children to Fort Sill, so the Aunties shifted their focus to families coming in from Mexico.

"What we have done is partner with the Oklahoma food bank," Cobb-Greetham said. "They are part of an extensive network of food banks and can ensure that donations can be translated into food and delivered to the El Paso Food Bank."

Cathy Nestlen, a spokesperson for the Regional Food Bank of Oklahoma (RFBO), part of greater Feeding America network, explained how the Aunties' donations will be spent.

"The Auntie Project is helping us to offset the cost that we have incurred towards food that we take to Texas," Nestlen said. "The El Paso Food Bank been working with other nonprofits in the community because some migrant families are being released into the community as they await whatever the court system has in place for them. There's nowhere for them to go, so the nonprofits and churches in El Paso provide them housing and food."

The Aunties' donations won't reach thousands of unaccompanied minors picked up by U.S. immigration officials and transferred to any of more than 170 HHS child shelters in 23 states - 30 in Texas alone - as none of them accept donations.

That's because legislation passed in 1870, the so-called Antideficiency Act, bans government workers and agencies from accepting or spending any money above what Congress gives them or accepting volunteer workers. The law came in response to 19th century abuses - agencies allowed themselves to run out of money early, assuming Congress would allocate more funds to keep them running.

Texas Representatives Chip Roy, a Republican, and Vincente Gonzalez, a Democrat, have introduced twin bills that would allow ORR shelters to accept donations, but analysts say neither stands much chance of passing.

On Sunday, the Aunties will hold a fundraiser, where they will present the RFBO with a check for $10,000, the first, they hope, of many.

"Our goal right now is sustainability," Cobb-Greetham said. "We would like to think that 20 years from now, something comes up and people might say, 'Oh, you should call the Aunties!'"