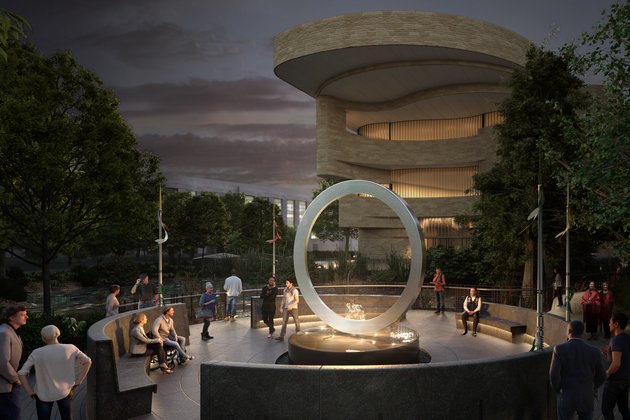 WASHINGTON - This Saturday, the National Museum of the American Indian (NMAI) in Washington will break ground on a $15 million monument to Native American military veterans, after more than two decades of planning.

In 1994, Congress passed legislation calling for the museum to build the memorial, noting that Native Americans, Native Alaskans and Native Hawaiians have a "long, proud and distinguished tradition of service" in the U.S. Armed Forces, "in numbers which far exceed their representation in the population of the United States."

Logistical and funding issues, however, stalled the project. Congress did not commit funds for the memorial and ruled that it should be housed inside the NMAI.

That changed in 2013 when Congress clarified the bill, allowing NMAI to begin raising funds from private donors and gave the green light to constructing the monument on museum property.

More than 120 artists submitted design proposals. Jurors were unanimous in selecting the winning design by Harvey Pratt, a former forensic artist, member of the Cheyenne and Arapaho Tribes in Oklahoma and a veteran himself.

His design, "Warriors' Circle of Honor," features a three-and-a-half meter stainless steel circle, a symbol culturally and spiritually significant to tribes across the United States.

"Everything the Power of the World does is done in a circle," Lakota spiritual leader Nicholas Black Elk told his biographer, listing the sky, sun, Earth, stars and even the seasons. "The life of man is a circle from childhood to childhood, and so it is in everything where power moves."

But, as jurors noted in 2018, the circle is a symbol non-Native people can also relate to, making it an inclusive design.

Today, at least 130,000 veterans identify as American Indian and Alaska Native. Some have been recognized as Purple Heart recipients, Bronze Star honorees, and been given the Congressional Medal of Honor, the highest U.S. military award.

"I served in Vietnam in the Marine Corps with the 3rd Marine recon unit (Reconnaissance Battalion)," Pratt said. "I grew up with people who knew all the old ways and what we did with warriors."

Native Americans have served in every U.S. war and conflict since the 18th century War of Independence from Britain.

"We were once warriors, and one of our rites of passage was to be accepted into warrior societies," he said. "But we don't have the old ways anymore. So, we go into the military to fulfill that rite of passage. In our way of life, once you have accomplished that deed, you are always a warrior and you have a responsibility for the rest of your life to be of service to the people."

To celebrate the upcoming groundbreaking ceremony, NMAI has planned a full day of events, including tours, history lessons and a conversation with Pratt, which will be streamed live on the NMAI website.

"I'm happy for our veterans and families of the past, present and future," he said.

If all goes according to plan, the memorial will open in November 2020.