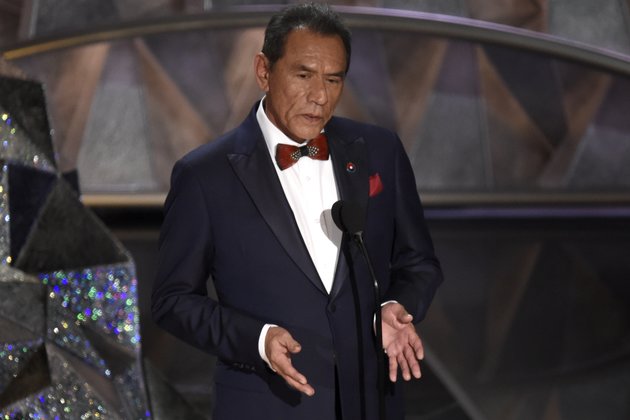 LOS ANGELES - When Cherokee actor Wes Studi was thinking about moving to Los Angeles to take a shot at being an actor in the 1980s, he asked a friend if it was a good idea. The friend said "why not? There aren't many Native American actors."

Instead of a deterrent, Studi took that as a plus.

"I thought, 'OK, so not a whole lot of competition then,'" Studi, 71, said laughing. "I thought why not take a leap and I did. And things turned out well."

Although there was no way he could have known it at the time, the Tulsa, Oklahoma native came at the perfect time too. Hollywood had started to move beyond its deplorable past of casting white actors for indigenous roles and looking for more authenticity in casting. Some of his first films included "Dances With Wolves," "The Last of the Mohicans" and "Geronimo: An American Legend" that would lead to a fruitful 30-year career that's still very active.

This Sunday, Studi will make history as the first ever Native American Oscar recipient at the 11th annual Governors Awards, alongside fellow honorary Oscar honorees David Lynch and Lina Wertmuller.

"I feel very honored about it," he said on a recent phone call from Santa Fe, New Mexico, which he has called home for the past 26 years. He just feels more comfortable living outside of Los Angeles, he said.

Studi came to acting somewhat late in life. He went to agriculture school, served in the Oklahoma National Guard and even went to Vietnam before he stated dabbling in theater and local educational television.

"I had a life before getting into this business. A non-acting life," Studi said. "And it turns out that life has served me well. I can connect with characters I play simply by referencing real life. It's been very helpful over the years to have experienced life outside of entertainment."

When he arrived in Los Angeles, a now defunct organization called the American Indian Registry helped him get his start. The group promoted Native American actors and made opportunities for them to meet agents. It led to Studi securing representation and booking Kevin Costner's Oscar-winning "Dances With Wolves," which then put him on Michael Mann's radar for what would be his most memorable role to date: Magua in "The Last of the Mohicans."

"I thank Michael Mann for having an open mind in terms of expanding the character of Magua to the point that he was sort of an antihero, but he had his qualities. He had his reasons for doing what he was doing," Studi said. "He and the writer were open to that were creating more of a three-dimensional character."

Mann would then go on to cast Studi again in "Heat" as an Los Angeles police detective - a somewhat rare opportunity for Studi to play a character who wasn't primarily defined by his ethnicity.

"It can be frustrating," Studi said. "I can understand the idea of wanting to get away from leathers and feathers. But it's a double-edged sword in its own way. Westerns and or period pieces in which Native Americans are portrayed have been the starting point and the bread and butter of Native American actors. Fortunately I've been able to cross over in a few roles over the years. Sometimes it's a matter of two steps forward and one step back."

With a slew of projects just wrapped or in the works, Studi doesn't appear ready to slow down or retire anytime soon.

"I retire every time we wrap a film," he said. "So I've had a taste of retirement and I'm not sure I enjoy it all that much."