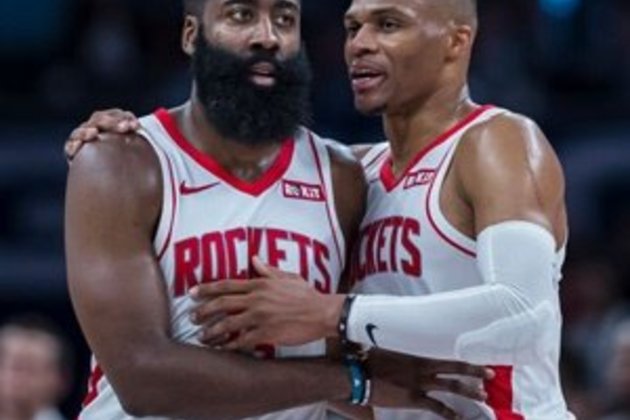 Harden shot 18-of-32 from the field, made all but one of his 18 free throws, and drained six three pointers as the Rockets overcame a 46-point night from Bradley Beal.

"I work hard every single day. I fall in love with it, mastering the game," Harden said. "You can't expect to be great if you don't put the work in.

"You might be doing everything right and things don't always work out your way. You got to keep pushing."

Russell Westbrook overcame a slow start to finish with his second triple double of the season with 17 points, 12 assists and 10 rebounds. Clint Capela tallied 21 for the Rockets, who improved to 3-1 on the season.

Beal tied the contest 158-158 with eight seconds remaining by making his free throws, but the Wizards couldn't tack on any more and dropped to 1-3 on the season.

Japan's ambassador to the United States, Shinsuke Sugiyama, attended the game to watch Hachimura, who was selected ninth overall by the Wizards in the 2019 entry draft.

This season marks a reunion of sorts for Westbrook and Harden. They spent three seasons together with Oklahoma City until Harden left in 2012 to join the Rockets.

Elsewhere, Joel Embiid scored 19 points before being ejected because of a third quarter fight as the Philadelphia 76ers won their fourth straight game to start the season by beating the Minnesota Timberwolves 117-95.

Embiid was sent to the showers along with Minnesota's Karl-Anthony Towns after the two got into a tussle that also included players and some coaches from both teams on Wednesday.

"I was built for this city," said Embiid.

"You gotta come in here, you gotta fight, you gotta play hard, you gotta be gritty, you gotta be a Broad Street Bully," he added in a reference to Philadelphia's rough and tumble championship NHL team from the 1970s.

No one was injured in the melee that ignited under the basket with the Sixers leading 75-55 halfway through the third.

After they exchanged words, the two big men wrestled each other to the ground as teammates and coaches charged into the fray to try and separate the combatants. At one point Sixers Ben Simmons put a choke hold on Towns, who ended up at the bottom of the pile.

Embiid and Towns were ejected. Embiid walked over to the sidelines and jokingly shadowboxed in front of the Sixers bench before being escorted to the locker room.

Towns declined to talk about the dust-up after the game.

"It was a competitive game. That's all it was," Towns said.

The victory leaves the 76ers as one of two unbeaten NBA teams along with the 3-0 San Antonio Spurs. The Timberwolves suffered their first loss falling to 3-1.

Andrew Wiggins scored 19 points and Towns finished with 13 points for the Timberwolves.

Elsewhere, Kemba Walker delivered his second straight 32-point performance as the new-look Boston Celtics rallied from a huge first half deficit to beat the Milwaukee Bucks 116-105.

New addition Walker had a breakout 32-point performance with the Celtics in a 118-95 victory over the New York Knicks on Saturday.

He matched that Wednesday and added six assists and six rebounds as the Celtics improved to 3-1 on the young season.

Boston, who finished as the fourth seed in the East last season behind Milwaukee, Toronto and Philadelphia, are trying to show they are an even stronger contender this time around.

"It has been a great start so far," said Walker, who scored 21 of his points Wednesday in the second half.

Giannis Antetokounmpo led the Bucks with 22 points and 14 rebounds.

Boston used a 26-7 run over the final seven minutes of the third quarter to take a 80-76 lead after the Bucks had built up a 19 point lead in the first half.

"We wanted to continue to play defence and let the offence come to us," Walker said. "We continued to grind and that was a hell of a win."