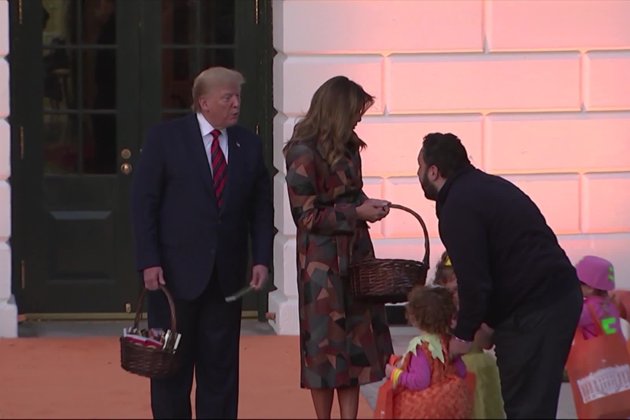 The Democratic-led House of Representatives is expected to approve a resolution on Thursday that would set up the rules for public hearings in the impeachment inquiry of US President Donald Trump.

The resolution would authorise rules for House committees to move forward with formal, public hearings on whether to impeach Trump and marks a historic political moment in the United States.

"We are now at the next stage here. It is now time to present the evidence to the American people," said Representative Jim McGovern, the Democrat chairman of the House Rules Committee.

"This paves the way."

The momentum now puts the House on a path to potentially passing articles of impeachment against Trump. If the House impeaches the president it would set up a Senate trial under the US Constitution in which the president would face potential removal from office.

"The president is in very bad shape in this impeachment," said Laurence Tribe, a professor of law at Harvard University, who has advocated for Trump's impeachment.

"The idea that the fix is in and there is no way the Senate would convict is premature," Tribe said.

At issue in the impeachment inquiry is whether Trump abused the powers of his office and damaged national security by withholding US military aid to Ukraine and orchestrating a pressure campaign for domestic, personal political gain.

Democrats allege Trump used the leverage of nearly $400 million in security aid to obtain a promise from Ukrainian President Volodymyr Zelenskyy to investigate Joe Biden, a top contender for the Democratic presidential nomination to challenge Trump in 2020, and his son, Hunter, who had served on the board of a Ukrainian gas company.

There has been no evidence of wrongdoing by the Bidens. According to testimony, the Trump administration also sought an investigation related the 2016 presidential election.

Trump has denied that there was any "quid pro quo" (Latin for "favour for a favour") and labelled the investigation a "witch-hunt".

Reflecting the sharp polarisation in US politics, Wednesday's vote is expected to fall along party lines with few crossovers by either Democrats or Republicans.

According to a count by Al Jazeera, 227 of 235 Democrats have already voiced support for the ongoing impeachment inquiry.

Republicans say they will oppose what they see as an unfair process.

"Most Republicans, if not all, will be against it," said Representative Mark Meadows, a leading House Republican.

"It doesn't allow for due process. It doesn't advance the cause of fairness or transparency. In the end, it is just one more partisan impeachment attack that hopefully will end soon," Meadows told Al Jazeera on Wednesday.

The eight-page resolution to be approved by the House provides for public impeachment hearings by the Intelligence and Judiciary Committees. Consulting lawyers for the committees would conduct questioning of witnesses for extended periods of time instead of five-minute rounds alternating between politicians.

The president and his lawyers would be invited to attend the presentation of evidence in the Judiciary Committee and provided an opportunity to make a closing argument.

If the resolution passes, "the opportunities for defence by the president and his defenders are more than ample and greater in some respect than the opportunities afforded to Clinton and Nixon," Tribe said, referring to former Presidents Bill Clinton, who was impeached, and Richard Nixon, who resigned before a formal impeachment vote was held.

"In any case the real opportunity for defence comes in the Senate trial," Tribe said.

Facing a divided and restive caucus, House Democratic leaders had for months avoided putting impeachment to a decisive vote, even on procedural matters. Trump and his Republican defenders argued the process in the House lacked legitimacy as a result and refused to cooperate.

"It is interesting that Speaker Nancy Pelosi has decided to hold the vote," said Jessica Levinson, a professor of law at Loyola Law School.

"It means that she is comfortable. She must feel that enough bad information has gotten out that it puts pressure on Democratic members that don't necessarily want to go down this road," Levinson told Al Jazeera.

Thirty-one Democrats hold seats in congressional districts Trump won in 2016, which means for those representing states like Arizona, Oklahoma and South Carolina, such a vote may be politically risky.

Constitutional scholars said Democrats were correct in adopting the posture that a vote was not necessary, even though they are now taking one, and they rejected complaints Republicans have made about the fairness of process.

"Constitutionally speaking, I don't think there are any specific requirements the House needs to go through. At the end of the day, they just need to take a vote on articles of impeachment," said Keith Whittington, professor of politics at Princeton University.

"There are some political calculations for wanting to go through a public process to build public support for the impeachment of the president," Whittington told Al Jazeera.

Following a whistle-blower complaint by a US intelligence officer in August, a combination of three House committees have held lengthy closed-door interviews with White House and State Department officials.

Some of those witnesses are likely to be called again to appear publicly and the Democratic Intelligence Chairman Adam Schiff has said the committee intends to release public transcripts of the interviews.

"We believe that we need to get a process in place that gets the evidence out to the public and let the people decide," McGovern said of Thursday's vote. "The allegations against this president are very, very serious."

There were signs on Wednesday that the Republican defence of Trump was shifting from questions of fairness of process and denying the president did anything wrong, to arguing that whatever he is shown to have done, does not rise to the level "high crimes and misdemeanours" warranting removal from office.

"I've listened to more testimony than almost any member of Congress and I can tell you that I am more convinced than ever that the president committed no impeachable offences. And candidly, any suggestion that aid was held up for nefarious purposes is not being borne out by the testimony I am hearing," Meadows said.

A USAToday/Suffolk University Poll released on Tuesday showed that even as public support for impeachment grows, Trump continues to enjoy support among his base of Republican voters.

The poll showed Americans are divided 46 percent in favour and 47 percent opposed on the question of whether Trump should be impeached. The survey had a confidence interval of plus-or minus three percentage points.

The US Senate is divided 53 Republicans to 45 Democrats with two independents who caucus with Democrats. Conviction in an impeachment trial requires two-thirds vote, or 67 of 100 senators.