Oklahoma State pulls out thriller in OT over No. 18 Texas Tech 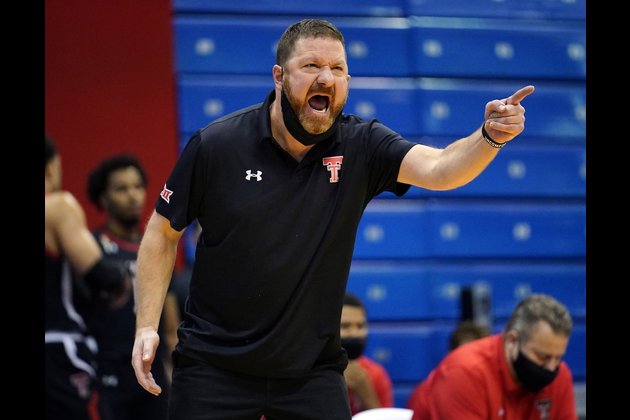 Two clutch free throws each from Bryce Williams and Keylan Boone lifted host Oklahoma State to a 74-69 upset victory over No. 18 Texas Tech Monday in Stillwater, Okla., to give the Cowboys the season sweep of the Red Raiders.

In another Big 12 Conference tilt chock full of plenty of March-like madness, the two teams went toe-to-toe and into overtime for the second time this season.

Terrence Shannon Jr. and Mac McClung both missed 3-point attempts on the possession after Boone's two makes and Williams corralled the long rebound and hit his foul shots to ice the win.

Freshman Cade Cunningham led the Cowboys (15-6, 8-6 Big 12) with 20 points and came up with a key bucket and steal in overtime. Kalib Boone added 18 points and 7 rebounds.

The Red Raiders forged overtime with an alert play by Shannon. McClung missed a 3 with eight seconds to go in regulation, with Shannon tracking down a long rebound and then zipping a pass to Kyler Edwards for a layup with 2.8 seconds left.

Before the late drama, it took a big run for the Cowboys to rally back after Texas Tech opened the second half with a 10-0 run.

After missing its first nine floor shots of the half, Oklahoma State uncorked a 15-0 binge, fueled by 10 points from Avery Anderson. All that damage came after Cunningham was tagged with his fourth foul and had to go to the bench.

The Red Raiders claimed a narrow 37-36 halftime lead, with Shannon and Kevin McCullar each scoring 10 points. Oklahoma State shot the ball well (15 of 28) but launched only five 3-point shots in the opening 20 minutes, making one.

The Cowboys struggled from the free-throw line in the first half (5-for-10) but bounced back to finish 22-for-32, including 7-for-8 in overtime.

Brent at $67 per barrel, production to remain high at least till April

BANGALORE, India: Contrary to analysts' predictions, OPEC and its allies decided to leave oil production unaffected until April, citing the ...

Musk moves home to Texas, after locating companies throughout state

AUSTIN, Texas: Aviation and aerospace company SpaceX is expanding its presence to align with global demand by setting up a ...

Volvo said all car purchases to be only online

GOTHENBURG, Sweden: Volvo targets to only manufacture electric cars by 2030 by significantly increasing the size of its U.S. South ...

CUPERTINO, California: Apple announced on Monday that all 270 of its store locations in the U.S. have officially opened for ...

VANCOUVER, Canada: Lawyers for Huawei chief financial officer Meng Wanzhou have sought a dismissal of the extradition case against her, ...

Iceland records 18,000 earthquakes in past week

REYKJAVIK, ICELAND - The volatile islands of Iceland have experienced unusual seismic activity in the past week, with over 18,000 ...

Yemen's Houthi rebels have carried out missile and drone strikes on a Saudi military base and an oil facility, expanding ...

BERLIN, Germany: In a change of policy, Germany has announced it will begin vaccinating those over 65 years-old, while recommending ...

WASHINGTON D.C.: Compromising with moderates, President Joe Biden and Democrats agreed to tighten the requirements for those eligible to receive ...

375 Michigan students locked out of school due to Covid testing

ANN ARBOR, Michigan: Some 375 University of Michigan students have been banned from entering school buildings because they have not ...