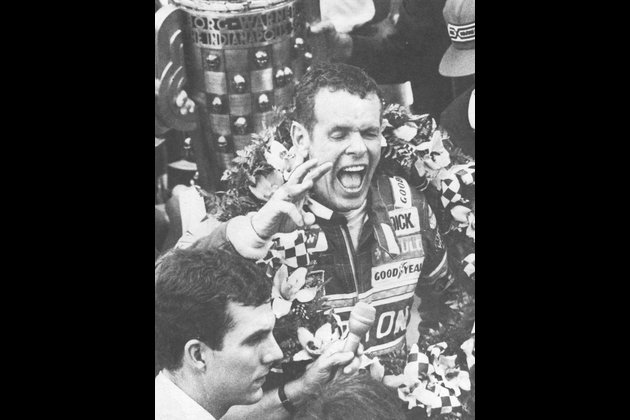 Officials at the Indianapolis Motor Speedway, where he won "The Greatest Spectacle in Racing" in 1968, 1975 and 1981, announced his death on Monday.

Unser was part of the first family of the Indianapolis 500. His brother, Al, won the race four times, making them the only set of brothers to drink the post-race milk reserved for the winner. In all, six members of the Unser family have driven in the Indy 500, with Al Unser Jr. continuing the family legacy with two wins.

Bobby Unser Jr. was born Feb. 20, 1934, in Colorado Springs, Colo., but his family moved to Albuquerque when he was a toddler. As a teenager, he drove modified stock cars before serving in the military as he and two of his brothers gravitated toward racing.

His older brother, Jerry, was killed at age 26 in an accident in 1959 at a practice run before the Indianapolis 500.

Bobby Unser made his Indy 500 debut in 1963 and is one of two drivers to win the race -- Rick Mears is the other -- in three different decades.

He was inducted into the Indianapolis Motor Speedway Hall of Fame in 1990 and was an Indy Car television analyst after retiring from driving in 1981 following his controversial Indy 500 win.

That year, Unser won the race, then was stripped of the title because of an infraction and Mario Andretti was elevated to the top finisher. After a lawsuit, Unser was named the winner again.

The two drivers didn't speak for many years, but they mended fences a few years ago.

"I join the racing world mourning the passing of Bobby Unser," Andretti wrote on Twitter. "The best of times..... when a fierce competitor can also be a very very very good friend. RIP my friend. Thanks for the memories."

Unser finished his career with 35 career Indy Car victories and two championships among his eight top-three finishes in the season points standing.

He was remembered throughout the racing community on Monday, including by Roger Penske, whom he raced for during the latter part of his career.

"There simply was no one quite like Bobby Unser," Penske said. "Bobby was a ferocious competitor on the track and his larger-than-life personality made him of one of the most beloved and unique racers we have ever seen. Bobby brought so much to Team Penske during his time with our team ... Beyond his many wins and accomplishments, Bobby was a true racer that raised the performance of everyone around him."

Unser is survived by his wife, Lisa; sons Bobby Jr. and Robby; and daughters Cindy and Jeri.

Google changing rules on working in office after Covid

MOUNTAIN VIEW, California: Some 20 percent of Google's staff will continue to work remotely after the offices reopen in the ...

Losses climb for Hyatt amid pandemic as public remains homebound

CHICAGO, ILLINOIS: Hyatt Hotels has reported that it is facing greater losses in Q1 as the public opted to remain ...

WASHINGTON D.C.: As part of a larger drive by lawmakers to advance climate and energy legislation, members of a U.S. ...

BEIJING, China: China set a new tourism record, as the Chinese made some 230 million trips over the extended May ...

NEW YORK, New York - It was like Groundhog Day as stocks forged to new highs on Wall Street on ...

ROME, Italy: Two young Americans have been sentenced to life in prison for the 2019 slaying of an Italian policeman.Found ...

JERUSALEM - Celebrating the final week of Ramadan, thousands of Palestinian worshippers at the Al-Aqsa Mosque gathered for prayer time ...

WASHINGTON DC - Amidst the radical turndown in the American economy during the Covid lockdown, birth rates in the United ...

WASHINGTON D.C.: The White House is talking with lawmakers to offer subsidies to the nation's nuclear power plants, in a ...