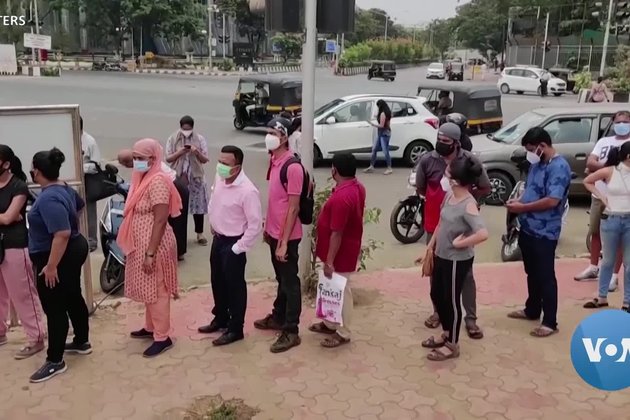 MUMBAI - As India reels from a second wave of COVID-19 infections that is devastating major cities, stockpiles are falling short of surging demand in the country, health experts warn. The country's mass immunization bid to expand its vaccination drive to all adults is posing to be a herculean task, they say.

India opened vaccinations to those who are 18 years of age and older this month. Although it is the world's largest vaccine manufacturer, the approximately 70 million shots for COVID-19 being produced per month cannot address the massive needs of the world's second most populous country, health experts say.

K. Srinath Reddy is the president of the Public Health Foundation of India, a health research and policy development organization based in New Delhi. He said the challenge to meet demands includes groups considered "new entrants," people between the ages of 18 to 44 years old.

"We are talking about 595 million people. So, we are talking of 1.2 billion doses," he told VOA. "It's a huge task and our vaccine stocks currently do not measure up anywhere near that."

Several states have said they cannot expand the drive because they are already struggling to inoculate older people with higher levels of risk.

FILE - Relatives carry the body of a person who died of COVID-19 as multiple pyres of other COVID-19 victims burn at a crematorium in New Delhi, India.

In cities like New Delhi and Mumbai, where the shots are being given to younger people, tens of thousands have been scrambling online to book limited slots on a government app for immunization since they became eligible on May 1. Only some have been successful.

"We got a slot but then the booking was cancelled," Piyush Kumar, a New Delhi resident who got vaccinated on the weekend said. "But we persevered and kept on trying to refresh the page and suddenly some slots [opened] at a hospital about 45 kilometers away. We rushed there."

India faces major challenges - Mumbai has an estimated five million people in the 18-44 age group but is only giving 2,500 shots per day due to limited stocks. Vaccinations for older people were suspended for days last week.

Critics are blaming authorities for a sluggish rollout of what was ambitiously billed as the world's largest vaccination program when it began in January with a target of reaching 300 million people by August.

Since then, about 2% of the population has been fully inoculated while about 10% has received one dose. As a result, much of the country was unprotected when it was hit by a ferocious second wave that hit seven million people in April alone - the country's count is about 20 million cases.

A woman argues with a doctor as she is turned back following shortage of COVID-19 vaccine at a vaccination center in Mumbai, India, Monday, May 3, 2021. (AP Photo/Rafiq Maqbool)

Experts say India failed to stockpile enough vaccines or invest early enough in boosting production facilities as it prematurely declared victory against the pandemic during a lull in infections earlier in the year. The government also sent 65 million doses to other countries as part of a "vaccine diplomacy" push.

"I think it was factored in their minds that we will not have to deal with a second wave and therefore we could have a measured, steady graduated vaccination program which can flow in steps," Reddy told VOA. "That is why we even felt we had the luxury of sending vaccines abroad to about 80 countries."

The vaccine powerhouse was relying on domestically produced vaccines being made by two Indian companies - the Serum Institute of India that is making the Oxford/AstraZeneca shots and a domestically developed vaccine by Bharat Biotech.

The government suspended exports and extended loans last month to build up infrastructure in the two companies as demand began exceeding supply. It has also stepped-up efforts to get vaccines from overseas. The first consignment of Sputnik V vaccines arrived from Russia this week and the vaccine will also be produced with local partners, but those doses could take months to reach the market. The government has said it will also grant emergency approval for vaccines approved in the United States, Britain, Europe or Japan.

Experts say the government needed a detailed plan on how it will secure the vaccines. "There was a shortage even when the drive did not open up to all adults," points out public policy and health expert Chandrakant Lahariya. "Now the target beneficiaries have increased three-fold while the vaccine supply, which was already short, has remained the same. So, you can imagine how big the gap is. Even in months this may not be solved unless some additional approaches and strategies are followed."

Adar Poonawalla, head of the Serum Institute of India, said this week that the shortages will continue through July when production is expected to increase. In an interview with the London-based Financial Times newspaper, he said he had not boosted capacity earlier because "there were no orders, we did not think we needed to make more than 1 billion doses a year."

Now fear overhangs cities like New Delhi where the ongoing battle for hospital beds, drugs, and medical oxygen by tens of thousands shows no signs of abating.

Even hospitals have been scrambling for oxygen stocks and patients have died in hospitals that briefly ran out of oxygen. Social media is filled with desperate pleas for help.

"I deleted social media apps for about a week in the middle because I just could not take it," Kumar said. "But I had to get back because a lot of people are seeking help on that platform, and I need to be available. The times are very anxious."

Google changing rules on working in office after Covid

MOUNTAIN VIEW, California: Some 20 percent of Google's staff will continue to work remotely after the offices reopen in the ...

Losses climb for Hyatt amid pandemic as public remains homebound

CHICAGO, ILLINOIS: Hyatt Hotels has reported that it is facing greater losses in Q1 as the public opted to remain ...

WASHINGTON D.C.: As part of a larger drive by lawmakers to advance climate and energy legislation, members of a U.S. ...

BEIJING, China: China set a new tourism record, as the Chinese made some 230 million trips over the extended May ...

NEW YORK, New York - It was like Groundhog Day as stocks forged to new highs on Wall Street on ...

ROME, Italy: Two young Americans have been sentenced to life in prison for the 2019 slaying of an Italian policeman.Found ...

JERUSALEM - Celebrating the final week of Ramadan, thousands of Palestinian worshippers at the Al-Aqsa Mosque gathered for prayer time ...

WASHINGTON DC - Amidst the radical turndown in the American economy during the Covid lockdown, birth rates in the United ...

WASHINGTON D.C.: The White House is talking with lawmakers to offer subsidies to the nation's nuclear power plants, in a ...