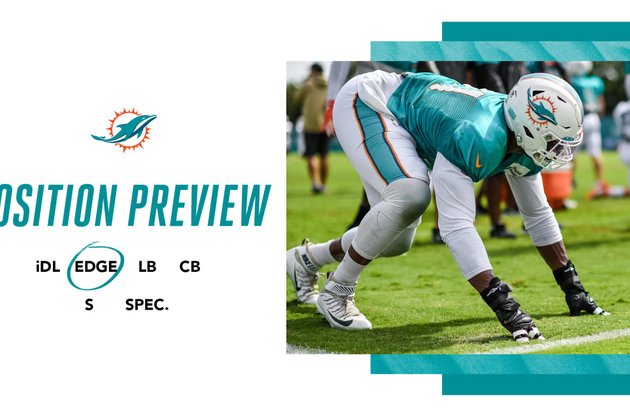 Today, our training camp preview series gives us a closer look at the edge (defensive ends and outside linebackers). Since the Dolphins defense calls for such a great deal of flexibility, we're defining edge defenders as players who lined up at the 5-technique (outside shoulder of the offensive tackle) or outside of that alignment on the majority of their snaps in 2020. To reserve your spot at Miami Dolphins training camp, click the photo below.

Our 11-part training camp preview series will give you an inside look into the Dolphins 90-man roster with stats, facts and insight into the group and individuals.

Austin Clark has a hand in this position; we detailed his profile yesterday on the interior defensive line write-up.

Group at a Glance

This group filled up the stat sheet for the majority of Miami's 41 sacks in 2020, which finished 10th-best in the NFL. Emmanuel Ogbah enjoyed a career-year with nine sacks, six tackles for loss, three forced fumbles and five batted passes. Second-year linebacker Andrew Van Ginkel also forced three fumbles en route to a 5.5-sack season with nearly double the tackles for loss figure from his rookie season (four in 2019 up to seven in 2020).

Vince Biegel returns from an Achilles injury that robbed the promising linebacker of his 2020 season. He led Miami in quarterback pressures in 2019 (34) after arriving via trade one week before the season. Newcomer Brennan Scarlett has played 56 career games both on the edge of the Houston defense and as an ace special teamer.

Rookie Jaelan Phillips was the first edge defender (defensive end or outside linebacker) off the board in the 2021 NFL Draft after a dominant season at the University of Miami. Phillips notched eight sacks and 15.5 tackles for loss with an interception and three passes defensed.

Jason Strowbridge can play inside and outside. He played 55 snaps on defense as a rookie in 2020 and 11 more on special teams. Fellow second-year player Tyshun Render played eight snaps as a rookie while Nick Coe was a member of the Miami practice squad in his first year.

Like something built in a lab, Phillips has the prototypical look and athletic measurements to play off the edge in the NFL. Once the nation's No. 1 rated high school prospect, Phillips led a destructive Miami Hurricanes defense before blowing the doors off his pro day testing. Phillips measured in the 88th percentile or better in the 40-yard dash (4.56s), shuttle (4.13s), broad jump (125") and 10-yard split (1.59s) - all at 6-foot-5 and 265 pounds.

In addition to the sack production, Phillips registered 42 QB pressures (Pro Football Focus) on 286 pass-rush reps - a pressure every 6.8 drop backs. More than just a pass rusher, Philips' 18 run stops (tackles within two yards of the line of scrimmage) landed in the 90th percentile of college edge defenders (PFF) for the 2020 season.

Since returning from injured reserve in Week 12 of his rookie season (2019), Van Ginkel's production-per-snaps-played continues to impress. After recording one sack, six QB pressures, seven run stops and four tackles for loss as a rookie, Van Ginkel enjoyed a big Year 2 jump. With 5.5 sacks, he picked up 19 pressures on 212 pass rush snaps (one every 11.2 pass rush reps).

Adding strength was a point of emphasis for Van Ginkel and his coaches in 2020. The result: 22 run stops on 196 run defense snaps (11.2 percent). The third-year linebacker has displayed the ability to win one-on-one pass rush situations, play backwards in coverage, defeat blocks en route to the ball carrier and generate ball production (three forced fumbles, one blocked punt).

From Week 12 on in 2020, Van Ginkel was PFF's 12th-overall graded edge defender. He picked up three sacks and 10 run stops over that period.

Vince Biegel led the 2019 Dolphins in QB pressures (34) and tied for the team lead with seven tackles for loss (Sam Eguavoen). Biegel achieved those feats despite playing just 49 snaps over the first four games coming over in a September trade from New Orleans. His 2020 season came to an end in training camp due to an Achilles injury.

Over the final 12 games, Biegel recorded at least two pressures in nine games and piled up 21 run stops over the same period. He added an interception, plus an entire highlight reel of hustle plays and crafty one-on-one pass rush wins against quality opponents.

During his five years in Houston, Scarlett totaled 1,369 defensive snaps and 962 more on special teams. He was off to the best start of his career in 2018 (two QB hits, five run stops, an interception and PBU) before his season ended prematurely with an injury. Then in 2019, Scarlett picked up where he left off by posting a career year (19 QB pressures, 19 run stops, three tackles for loss). He missed five games in 2020 but posted four QB pressures and 11 run stops.

Scarlett is big, imposing and loves the physical element of the game. He sets a strong edge and tight ends will have to work to access a clean release off the line when No. 57 is on the other side. Scarlett's motor is perhaps most evident on special teams where he's recorded 14 career tackles on coverage teams.

A terrific week at the Senior Bowl in 2020 put Strowbridge on the radar for teams looking for a versatile defensive lineman. Playing a combination of positions his final year at Chapel Hill, Strowbridge registered 28 QB pressures and 30 run stops (PFF). He appeared in eight games showing promising growth throughout his rookie season.

With a rare blend of length, power, heavy hands and lateral agility, Ogbah enjoyed a breakout year during his first season with Miami. His 66 QB pressures ranked third among all edge defenders (PFF) and his 26 run stops checked in inside the top 20.

A consistent snap-eater who played both off the edge and inside at the 3-technique (outside shoulder of the guard), Ogbah filled up the stat sheet. He added five batted passes and three forced fumbles, including two that were scooped and scored by his teammates. Ogbah features a variety of pass rush moves, but none more deadly than his patented cross-chop - a move he broke down this offseason on Drive Time with Travis Wingfield.

An undrafted free agent in 2019, Ledbetter worked his way up the depth chart to opening day starter of that rookie campaign. After a strong showing, Ledbetter has yet to return an NFL field. He played 51 snaps in that lone game with a sack, two QB pressures and four run stops but suffered a season-ending injury. If he can recover from the knee injury, Ledbetter features an intriguing skillset at 6-foot-4, 282 pounds.

Making his NFL debut in 2020, the majority of Render's rookie season was spent refining his craft on the practice squad.

Render registered 10 tackles for loss, 3.5 sacks, two forced fumbles and an interception in his final year as a collegian. He won MTSU's Defensive Player of the Week six times and won the team's "Grinder Award" for his work in the program's spring practices.

A big-bodied end, Nick Coe wrecked shop in college. He totaled 21 tackles for loss with nine sacks rushing all over the formation at Auburn. He finished his college career with 55 QB pressures and 50 run stops. He was on the Dolphins practice squad for the entirety of the 2020 season.

U.K.'s Channel 4 in discussions for sale to American Discovery Channel

SYDNEY, NSW, Australia - Stocks in Asia were mixed on Wednesday with Japan's indices losing ground, while Australia rose to ...

PARIS, France: The French auto market is not rebounding as quickly as hoped for, with blame being placed on the ...

Zoom to pay $85 mln due to sharing data, 'Zoombombing'

SAN JOSE, California: Zoom Video Communications has agreed to pay $85 million, along with improving its security, as a settlement ...

NEW YORK, New York - Wall Street bounded ahead on Tuesday with solid gains being recorded by all the major ...

San Francisco, California: Even as restaurants struggled to survive during the Covid lockdown in California, many fear they will not ...

Protests in France to block use of Covid health pass

PARIS, France: Thousands of people in Paris and other French cities protested against the introduction of a mandatory COVID-19 health ...

BERLIN, Germany: China and India missed a U.N. deadline to submit new plans detailing how they will reduce greenhouse gas ...

TUNIS, Tunisia: Some 394 migrants were rescued from an overcrowded wooden boat in the Mediterranean Sea on Sunday.The Sea-Watch 3 ...