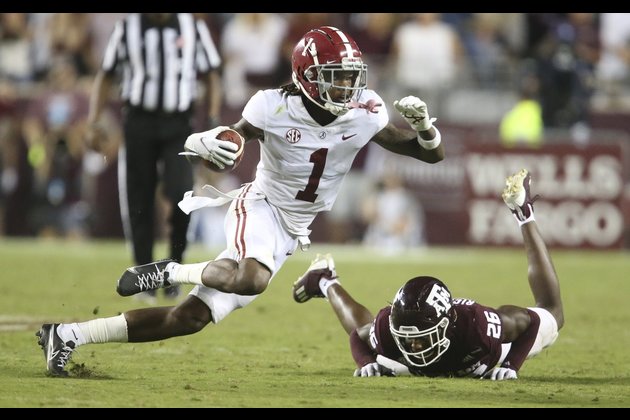 Alabama remains the second betting favorite to win the College Football Playoff despite suffering its first loss of the season on Saturday.

The Crimson Tide dropped to No. 5 in the Associated Press Top 25 on Sunday, with Georgia taking over the No. 1 spot for the first time since 2008, when they topped the preseason poll. They have not been No. 1 in the regular season since November 1982.

The Bulldogs also elevated to the CFP favorite at BetMGM (130) and DraftKings (125). Right behind them are their chief SEC rival, with the Crimson Tide being offered at 200 and 220, respectively.

The next-shortest odds belong to Ohio State, which is 1000 at BetMGM and 800 at DraftKings despite suffering a home loss to Oregon earlier this season. The Buckeyes have shorter odds than undefeated No. 2 Iowa (2000 at both sportsbooks), No. 3 Cincinnati (2000 at BetMGM, 2500 at DraftKings) and No. 4 Oklahoma (1500 at both).

Alabama lost at unranked Texas AM, but benefitted from the defeat coming at the hands of an SEC rival and from the lack of undefeated teams among the Power 5.

Michigan (6-0) has managed to remain undefeated despite a number of close calls. The Wolverines are being offered at 3000 by both sportsbooks. Big Ten rival Michigan State, Kentucky from the SEC, the Big 12's Oklahoma State and the ACC's Wake Forest are also undefeated and while they have continued to rise within the top 25, both remain longshots among oddsmakers.

The Heisman Trophy battle continues to look like a two-quarterback race.

Alabama's Bryce Young is the current favorite at 185 at BetMGM and 180 at DraftKings, while Ole Miss' Matt Corral is 210 and 200, respectively.

WASHINGTON D.C.: After being locked out for 18 months during the Covid pandemic, fully vaccinated Irish travelers will be able ...

Electronics industry not hopeful for early end to chip shortages

TAIPEI, Taiwan: In a webcast, Taiwan Semiconductor Manufacturing Company (TSMC) has outlined its expansion strategies, which include building a Japan-based ...

WASHINGTON D.C.: A recently released report has detailed how the August surge of the Covid Delta variant saw record numbers ...

WASHINGTON D.C.: U.S. Secretary of Interior Deborah Haaland has announced that the U.S. government will auction lease agreements for seven ...

DUBLIN, Ireland: Property prices in Ireland are increasing at double digit rates for the first time in a decade.Since August, ...

Russian population falls by nearly 1 million in past 12 months

MOSCOW, Russia: Demographer Alexei Raksha reports that Russia has experienced its most severe population decline over the past 12 months ...

Bangladesh to move 81,000 Rohingya to island after UN deal

DHAKA, Bangladesh - Bangladesh intends to transfer more than 80,000 Rohingya refugees to a distant island in the Bay of ...

CHAPEL HILL, North Carolina: Following a second student suicide during the fall semester, the University of North Carolina at Chapel ...

MOSCOW, Russia: The Russian government has issued a statement saying it disagreed with the comments of new Japanese Prime Minister ...

China and Iran court Taliban, while IS aims for chaos

On October 8, a terrible blast struck the worshippers attending Friday noon prayers at the Gozar-e-Sayed Abad Mosque in the ...

Pirates of the Caribbean: Dead Men Tell No Tales