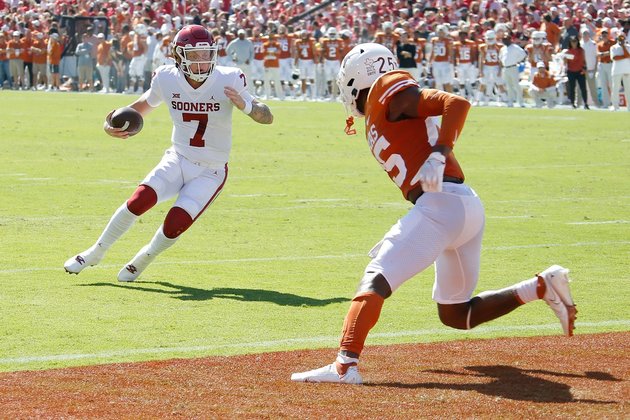 However, after freshman Caleb Williams replaced a struggling Rattler against Texas last week, Rattler's job is in jeopardy.

Sooners coach Lincoln Riley said he wouldn't make an announcement beforethe game who would start at quarterback when No. 4 Oklahoma hosts TCU on Saturday.

"We'll see how the week plays out and we'll see where we are when we get to Saturday," Riley said. "The guys have done well."

Williams gave the Sooners a shot in the arm against the Longhorns, coming on with Oklahoma trailing 35-17 and leading his team to a 55-48 win. Williams threw for 211 yards and two touchdowns and ran for 88 yards and another score in that game, his first extended look in crunch time this season.

Williams' running ability gives the Sooners offense a different look, but TCU coach Gary Patterson said not much was fundamentally different with Williams at QB as opposed to Rattler.

The Sooners (6-0, 3-0 Big 12) have won four consecutive games and five of six by seven or fewer points to stay undefeated and in the thick of the College Football Playoff race.

Running back Zach Evans has been the driving force behind the Horned Frogs' offense, rushing for 586 yards and five touchdowns so far.

Against the Sooners last season in Oklahoma's 33-14 win, Evans had just one carry for 10 yards but had five catches for 56 yards.

"They're doing a great job of using him different ways," Riley said. "He's got a great combination of strength and speed and running aggressively."

Evans has rushed for more than 100 yards in each of the past four games, including 143 and two touchdowns on 17 carries in the win over the Red Raiders.

As much success as TCU has had on offense, it has struggled on defense, allowing more than 30 points in four consecutive games for the first time since 1997.

"We're not happy where we're at really as a whole group, but one thing I do like about what they've done -- they are playing hard," Patterson said of his defensive players. "And as long as you play hard, you're going to give yourself an opportunity to be successful."

The Sooners have won seven consecutive games in the series, with TCU's last win coming in 2014.

Oklahoma has won all four home meetings since the Horned Frogs joined the Big 12. Those games, though, mostly were close, with the Sooners winning by an average of 6.5 points, including a 28-24 decision in their last meeting in Norman in 2019.

NEW YORK, New York- U.S. stocks were uneasy early Wednesday following a release of a raft of economic data but ...

OTTAWA, Canada: Canada has launched its Indo-Pacific strategy, which includes spending worth $1.7 billion, with the aim of enhancing military ...

Italy to raise billions with windfall tax on energy companies

ROME, Italy: A draft of the government's 2023 budget seen by Reuters indicates that Italy plans to charge energy companies ...

LONDON, England: In a world aviation first, British company Rolls-Royce has announced that it has successfully tested a hydrogen-powered aircraft ...

King could step in if Malaysia parliament cannot choose leader

KUALA LUMPUR, Malaysia: As support for a conservative Islamic alliance prevented major coalitions from winning a simple majority in its ...

BUFFALO, New York: Just ahead of the busy Thanksgiving holiday week, western New York state was hit by a snowstorm, ...

After 73 years, Biden tells Palestinians to wait until conditions are right

NEW YORK CITY: Granting Palestine full state membership status at the UN would be a "practical" step that could preserve ...

WASHINGTON D.C.: In the largest dam removal undertaking in U.S. history, a U.S. agency last week approved the decommissioning of ...