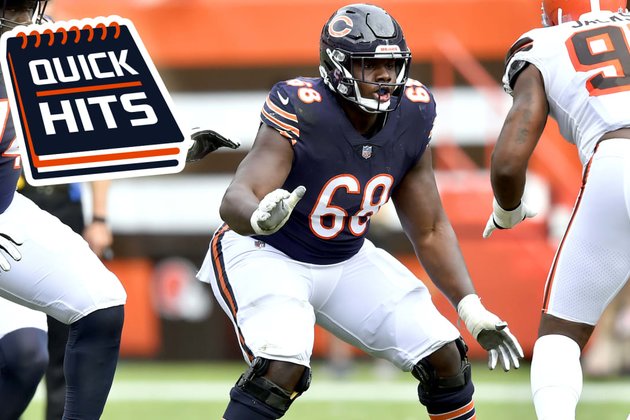 They didn't know it at the time, but a poor performance in a Week 3 loss to the Browns seems to have served as a watershed moment for members of the Bears offense.

Since limping out of Cleveland following a 26-6 defeat, the Bears have rushed for 331 yards and four touchdowns on 76 carries in back-to-back wins over the Lions and Raiders.

"That was kind of a punch in the mouth to all of us," said tackle Elijah Wilkinson, "kind of a wakeup call to get back at it and get back to work, hone-in our technique and everything and kind of just come back at it and be physical and attack the next play and just keep going. I think that woke us up a little bit."

Wilkinson played a key role last Sunday in Las Vegas, entering the game at right tackle when starter Germain Ifedi sustained a knee injury in the second quarter. Wilkinson subbed in for the injured Jason Peters at left tackle in the season opener but likely will remain at right tackle after Ifedi was placed on injured reserve this week.

"It's been kind of wild flip-flopping back and forth," Wilkinson said. "It's not as easy as everybody makes it seem, so it's definitely been pretty tough. But I'm just happy to be out there and be back playing. It feels good to be back."

Rookie on the rise: With David Montgomery on injured reserve due to a knee injury and Damien Williams placed on the reserve/COVID-19 list Thursday, rookie running back Khalil Herbert could see an even more expanded role Sunday when the Bears host the Packers than he did versus the Raiders.

With Montgomery unable to play in Las Vegas, the sixth-round pick from Virginia Tech rushed for a game-high 75 yards on 18 carries.

"It felt good," Herbert said. "It's something you've always dreamed of doing, so being able to go out there and help my team win, it felt really good."

When Herbert was drafted by the Bears, he joined a crowded backfield that included veterans Montgomery, Williams and Tarik Cohen. With that depth and experience ahead of Herbert on the depth chart, it seemed unlikely he would get a lot of reps on offense.

"Every day I come in here, I've got to be ready to go," Herbert said. "I didn't know when the playing time would come. It came earlier than I thought. But those guys did a great job of always keeping my mind going, keeping me mentally in tune and keeping me ready to go."

Opportunity knocks: Another ascending young player who could see increased playing time due to an injury to a veteran teammate is outside linebacker Trevis Gipson.

With Jeremiah Attaochu out for the season with a torn pectoral muscle he sustained against the Raiders, Gipson likely will get more reps. The 2020 fifth-round pick from Tulsa has shown promise, recording a sack in each of the Bears' last two games.

"I feel really good about this opportunity," Gipson said. "Unfortunately, it is a bad situation for [Jeremiah] Attaochu, but he's a close brother of mine. I prayed for him and I hope he comes back healthy. As far as the opportunity, I look to take full advantage of it."

Gipson has long admired Khalil Mack and Robert Quinn and was amped to see a highlight of the two veteran pass rushers celebrating on the sideline when Gipson recorded a sack in Las Vegas.

"I was talking to my grandfather and I was telling him it was an amazing feeling because I'm a big fan of Khalil Mack and Robert Quinn," Gipson said. "To see them cheering me on, it was a different feeling, especially going back 2-3 years ago, being fans of those guys not knowing three years down the road that they would be cheering for me like I did for them."

Receiver/return specialist Jakeem Grant Sr. was added to the injury report with a groin injury that limited him in practice.