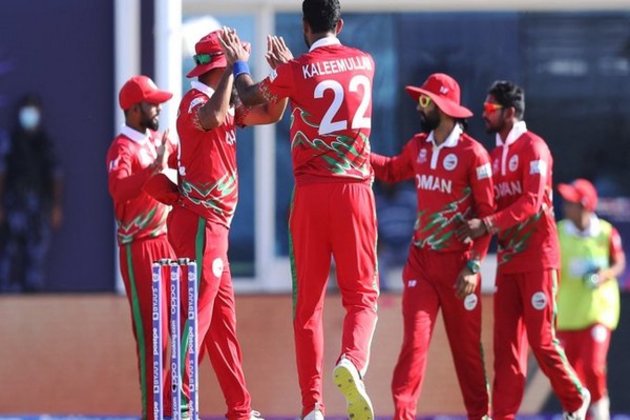 Later in the day, Scotland will lock horns against Bangladesh in the same group.

Chasing 130, Oman got off to a good start as opening batters Jatinder Singh and Aqib Ilyas put on 46 runs inside the first six overs. Both batters continued with their momentum and at the halfway mark, Oman's score read 88/0, with the side needing just 42 more runs for the win.

Both batters brought up their 100-run opening stand in the 12th over of the innings. In the end, PNG was not able to take any wickets and Oman cruised to a ten-wicket win with 38 balls to spare.

Earlier, Assad Vala played a knock of 56 but Zeeshan Maqsood's four-wicket haul helped Oman restrict PNG to 129/9. Sent into bat first, Papua New Guinea got off to the worst start possible as Bilal Khan dismissed opening batter Tony Ura (0) in the very first over. The other opener Lega Siaka (0) also failed to trouble the scores and PNG was reduced to 0/2 in the second over of the innings.

Charles Amini and skipper Assad Vala then retrieved the innings for PNG as the duo put on 81 runs for the third wicket. This partnership helped PNG come back into the contest, however, a proper confusion in the middle helped Oman as the side was able to dismiss Amini (37) via a run-out in the 12th over, reducing PNG to 81/3.

Soon after, Vala (56) also departed as he was sent back to the pavilion by Kaleemullah in the 14th over, and the lower-order was required to take PNG to a respectable score. However, PNG lost its way in the final overs, and the side had to settle for a score of just over the 125-run mark.