Jazz hold off Thunder thanks to late surge from Donovan Mitchell 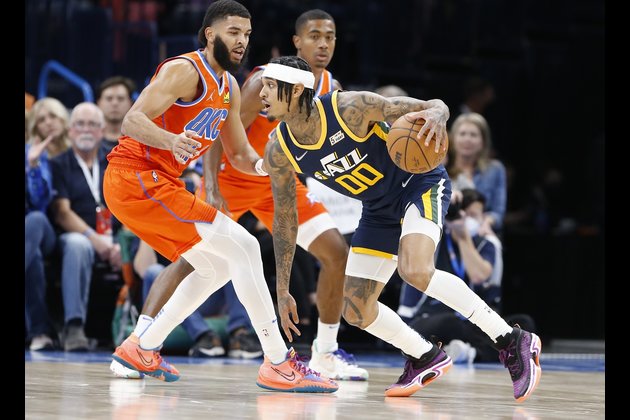 Donovan Mitchell scored 13 points, including a trio of buckets in the final minute, to lift the Utah Jazz to a 110-104 win over the Oklahoma City Thunder on Wednesday in Oklahoma City.

Jordan Clarkson led the Jazz with 20 points off the bench while Bojan Bogdanovic added 19 points and Rudy Gobert 15 points and 17 rebounds.

The win was the fourth in five games for the Jazz, while the Thunder have lost four consecutive games and six of seven.

Mitchell had been mostly quiet until the final minute, when he hit three consecutive Utah baskets to keep the Jazz in front.

Josh Giddey tied the game for the Thunder with a 3-pointer with 2:35 remaining, before Mike Conley answered with a quick layup to put Utah back on top.

After Oklahoma City came up empty on two possessions with a chance to tie or take the lead, Mitchell extended the lead with a putback, hit a jumper with less than 30 seconds left, then answered another Giddey 3 with a layup with less than 15 seconds to go to all but put the game away.

Dort had struggled over the past three games, going just 14 for 44 from the floor after scoring 20 or more in the five games preceding that, shooting better than 58% during that stretch.

Giddey, serving as Oklahoma City's primary point guard for the second consecutive game with Shai Gilgeous-Alexander once again out with a sprained right ankle, had a season-high 19 points while adding seven rebounds and eight assists.

Giddey became just the third player in NBA history with 100 assists and 100 rebounds in his first 20 games, joining LaMelo Ball and LeBron James.

The Jazz bench took a hit early when Hassan Whiteside was ejected late in the first quarter after picking up back-to-back technical fouls during a stoppage for arguing with officials.

After three games with Dave Bliss serving as the Thunder's acting coach, Mark Daigneault returned to the bench for Oklahoma City.