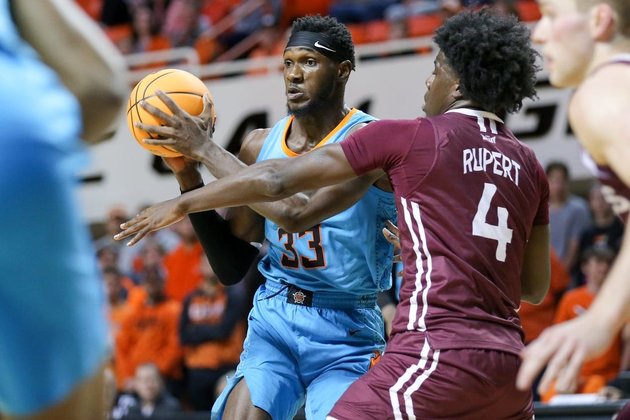 Neither DePaul nor Oklahoma State are satisfied with playing in Sunday's consolation final of the Baha Mar Hoops championship in Nasaau, Bahamas, but the Cowboys probably have more of a case to be upset that they're not in the title game.

With three seconds left in a tie game against UCF on Friday night, Oklahoma State went on a 2-on-1 fast break and Avery Anderson III threw an alley-oop for Moussa Cisse. But the pass was too low, Cisse couldn't handle it and the game went into overtime -- when UCF claimed a 60-56 victory.

"I'm incredibly disappointed," said Oklahoma State coach Mike Boynton. "We put ourselves in great position early on and obviously played very, very poorly from a shooting standpoint. You can't go 2 for 20 from 3 and win a high-level game.

"I can't get away from the fact that we had several clear fast breaks that turned into zero points. Literally, at the end of regulation, we have a 2-on-1 I've seen connected on a hundred times at least. The game's over right there. So it's not just the 3s. It's the missed layups also.

"This team doesn't have a killer instinct yet at this point."

But it does have a consistent big man in Cisse. He stacked up 14 points, 14 rebounds and 6 blocks against UCF -- giving him three consecutive double-doubles. He's averaging 10.3 points, 11.0 rebounds and 4.0 blocks per game.

While Oklahoma State (2-2) surrendered a 15-point second-half lead to fall into the consolation game, DePaul (3-1) had to deal with a 15-point halftime deficit in its 69-61 loss to Santa Clara.

"Our guys did a good job of fighting," said DePaul coach Tony Stubblefield. "When you get beat 48-32 on the boards, it's going to be tough to win games like that.

"We've got to get better. That's the reality of it. We've got to have more ball movement. We only had 10 assists (against Santa Clara). I thought the ball was sticking. There's a lot of areas where I feel we have to improve."

With regards to the lack of ball movement, DePaul has been playing without injured starting point guard Caleb Murphy. In his absence, Oklahoma transfer Umoja Gibson has stepped up to run the offense.

Gibson, who is averaging 17.0 points and 6.5 assists, has experience dealing with Oklahoma State. In four OU-OSU matchups the last two seasons, Gibson averaged 10.5 points as the Cowboys took three of four.