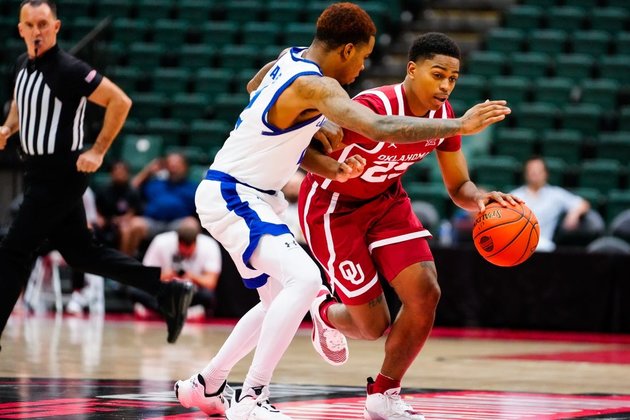 Grant Sherfield scored a season-high 25 points to lead Oklahoma to a 77-64 win over Seton Hall in a semifinal of the ESPN Events Invitation on Friday in Lake Buena Vista, Fla.

The Sooners (5-1), who have won five consecutive games since a season-opening loss to Sam Houston State, will take on Ole Miss in Sunday's championship game, while the Pirates will play Siena in the third-place matchup.

Sherfield made 9 of 17 shots in the victory, including 3 of 5 from 3-point range for the Sooners. Sam Godwin scored a season-high 12 points while Jalen Hill and Jacob Groves added 10 apiece.

Al-Amir Dawes led Seton Hall (4-2) with 12 points, making four 3-pointers. KC Ndefo and Dre Davis were the Pirates' only other double-figure scorers with 10 points each.

Outside of Dawes' 4-for-5 night from deep, the Pirates were just 1-for-8 from beyond the arc.

The Sooners' Tanner Groves played just six minutes in the first half after picking up his second foul about 10 minutes into the game. But he was a huge factor in the second half, finishing with eight points, five rebounds and two steals in his 15 minutes of action.

After making all three of his 3-pointers and scoring a season-high 17 in Thursday's win over Nebraska, Groves was held scoreless until his 3-pointer with about 12 minutes remaining put the Sooners in front 52-51. He picked up his fourth foul with more than 11 minutes left, sending him to the bench until less than six minutes remained.

But Groves came up big down the stretch before fouling out in the final minutes.

With less than three minutes left, Groves leapt up to grab the ball off Sherfield's blocked shot and quickly shoveled it up to the basket to score as the shot clock wound down to put the Sooners up 10 at 70-60.

Then he grabbed a defensive rebound at the other end and hit a 3-pointer on the ensuing possession to all but put the game away with just less than two minutes remaining.

Neither team led by more than five until the Sooners executed the game's final lead change with a 7-0 run to take a 59-53 lead with just less than nine minutes remaining in regulation.

Oklahoma ended the game scoring 25 of the final 36 points.