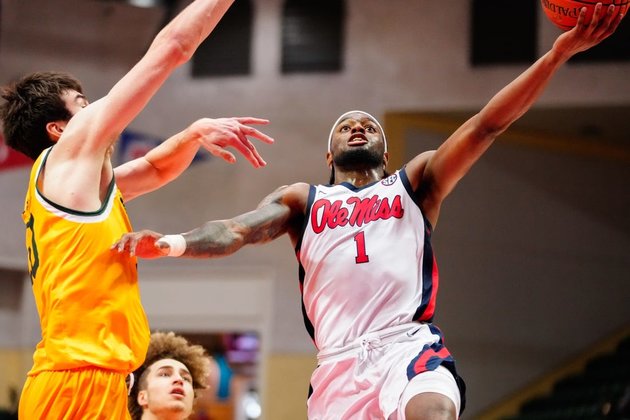 The interior strength of Mississippi matches up with the perimeter prowess of Oklahoma when the soon-to-be Southeastern Conference rivals meet in the finals of the ESPN Events Invitational on Sunday in Lake Buena Vista, Fla.

Save for a late flurry by Stanford against Mississippi in the tournament opener, both the Rebels (6-0) and Sooners (5-1) have had their way in the strong field of eight.

Mississippi has used superior shooting and rebounding to outlast Stanford 72-68 and Siena 74-62 to reach the finals.

The Rebels have hit exactly half their shots in the two wins despite going just 10-for-29 (34.5 percent) on 3-pointers. But their dominant play around the hoop has not only resulted in 48-for-87 accuracy (55.2 percent) on two-point tries but also a 65-53 advantage on the boards.

Amaree Abram has been the big scorer for Mississippi in the tournament with 26 and 19 points, while Jaemyn Brakefield has put up 17 points in each game, making 14 of his 20 shots.

"I'm so excited for Jaemyn," Rebels coach Kermit Davis said after the Siena win. "You can't imagine how many hours he's put in (the) gym since last year. His conditioning is elite. I don't think I took him out in the second half. He can play all day."

Conditioning might not be a big factor in the finals as both teams enjoyed an off day on Saturday. Playing a third game in three days could have helped Oklahoma, which has shown off its depth by getting double-figure scoring from four guys in each of its wins.

Like Mississippi, the Sooners have connected at upward of a 50-percent rate from the field in beating Nebraska 69-56 and Seton Hall 77-64. But they've done much of the damage from long range, going 19-for-40 from beyond the arc.

Grant Sherfield has been Oklahoma's top scorer in the tournament with a total of 35 points, going 5-for-10 on 3-pointers. Jacob Groves has made 5 of 9 attempts from beyond the arc.

Sooners coach Porter Moser said the matchup with Seton Hall prepared his guys well for what Mississippi is expected to bring.

"We played really tough," Moser said after Friday's win. "Seton Hall is so physical. They are athletic and they keep coming at you. It was a Big 12-level intensity game with how tough you had to be."