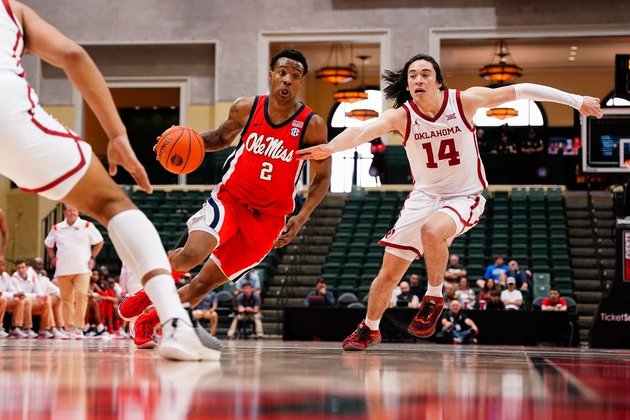 Consecutive layups by Bijan Cortes gave Oklahoma the lead for good and the Sooners shut out Mississippi over the final 4:26 for a 59-55 victory in Sunday's ESPN Events Invitational championship game in Lake Buena Vista, Fla.

Amaree Abram had a game-high 17 points for the Rebels, who had beaten Stanford and Siena to reach the finals.

After a seesaw first 30 minutes during which the Sooners built a 48-42 lead, Mississippi appeared on the verge of taking control of the game for the first time after a 13-4 burst that featured seven points from Abram.

But down 55-52 with just 4:26 remaining, Oklahoma saved its best for last -- especially on the defensive end. Ole Miss missed its final eight shots, including five 3-point attempts.

Meanwhile, Cortes' layups gave the Sooners the lead for good at the 3:13 mark. After Jalen Hill added a short-range hoop of his own, Oklahoma had a 58-55 lead with 2:16 to play.

A free throw by Oklahoma's Tanner Groves with 22 seconds left was the only scoring after that.

Sam Godwin backed Sherfield with 11 points to go with a team-high six rebounds for the Sooners, while Cortes and Groves finished with 10 points apiece.

Oklahoma outshot Mississippi 53.5 percent to 45.1 percent to overcome an 18-12 disadvantage in scoring on 3-pointers.

Abram made 7 of 13 shots en route to his 17 points and added five assists for the Rebels. TJ Caldwell added 10 points, while Jaemyn Brakefield led all rebounders in the contest with nine.

Oklahoma made four of its six 3-point attempts in the first half and yet still found itself down 34-32 at the break. Neither team led by more than five in the first 20 minutes, during which there were six ties and four lead changes.