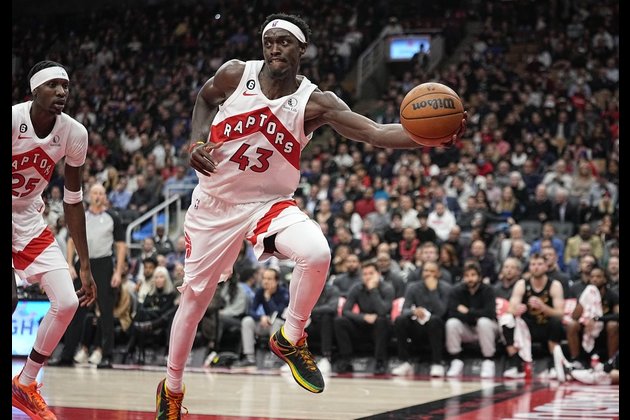 The Toronto Raptors finally got Pascal Siakam back.

The New Orleans Pelicans will have to wait a little longer for Brandon Ingram's return as they host the Raptors on Wednesday night.

Siakam returned from a 10-game absence due to a strained right adductor to score 18 points and grab 11 rebounds in Toronto's 100-88 home victory against the Cleveland Cavaliers on Monday.

"He was really good," Raptors coach Nick Nurse said of Siakam. "Looked really like he hadn't missed a beat."

Toronto did decent during the absence of its leading scorer, splitting the 10 games. Against Cleveland, O.G. Anunoby added 20 points, Gary Trent Jr. scored 14, Fred VanVleet had 13 and Scottie Barnes 11. Siakam made 7 of 14 field goals, including 1 of 3 3-pointers.

"I feel like I need to get my legs under me, which is expected," Siakam said. "To play at that speed, the game is different. I mean I've been working and all that, but game speed is different and just to be able to sustain it for a long time. I felt like I did OK, but I got to continue to get better. Once I get my legs under me, I can provide a little bit more. But yeah, just good to be out there."

Barnes, the NBA Rookie of the Year last season, also returned from injury against Cleveland. He had missed two games because of a sprained left knee.

Pelicans coach Willie Green said after practice Tuesday that Ingram (toe) will not play against the Raptors. The team's second-leading scorer sat out a 105-101 home victory against Oklahoma City on Monday, three days after sustaining the injury in a loss at Memphis.

Despite being short-handed, New Orleans had five scorers in double figures against the Thunder.

Zion Williamson scored 23 points, including a go-ahead basket in the final minute, and tied a career high with eight assists and added eight rebounds.

"I always try to play basketball the right way," Williamson said. "Mathematically speaking, if there are three people on me, then two people have to be open. I trust our shooters. We have great shooters on our team. I was just finding them, and they were hitting shots."

Green said the victory with a short-handed roster was the type of game "we relish."

"Guys are out and we believe in each other," Green said. "Guys had opportunities to play more minutes and some guys that don't play a ton had an opportunity to play. We had to dig down with guys being out."

Even with the absences, Green still used 10 players, nine of whom scored at least four points.

"We have a really deep team," Murphy said. "We have a lot of guys who can really play basketball at a high level. We played together, and we played smart."