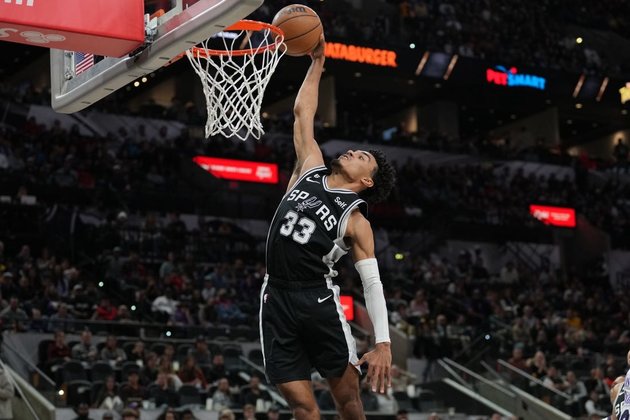 Even in the middle of an eight-game losing streak -- tied for the fourth-longest in franchise history -- San Antonio Spurs coach Gregg Popovich remains high on his team's fight.

"They have got great character," Popovich said. "I am proud of them. They just keep playing. It doesn't matter what thescore is, or who is there or who is not there. They are unbelievably coachable and they're trying very hard to do what we want them to do."

The Spurs will attempt to break the losing streak against the host Oklahoma City Thunder on Wednesday.

Tre Jones has been one of the bright spots recently for San Antonio.

Jones is coming off a 23-point, 13-assist performance in the Spurs' 143-138 home loss to the Lakers on Saturday night. Both numbers were career highs.

In the last two games, the third-year guard is 16 of 26 (61.5 percent) from the floor. Jones is averaging 12.2 points and 7.1 assists per game -- both more than double his previous career highs.

"He's a fine young player, it's just you've got to figure out between the ears how hard you have to play at this level and he's responding to that."

The Thunder's Shai Gilgeous-Alexander has scored 30 or more points in five consecutive games since scoring a season-low 15 in a loss to Memphis on Nov. 18.

Gilgeous-Alexander is shooting 41.9 percent from the floor during that stretch, down nearly 12 percent from where he was shooting in his first 15 games of the season.

But Gilgeous-Alexander is making up for it by getting to the free-throw line more consistently. He's averaging 13.4 free-throw attempts per game during the recent stretch.

"It's keeping me afloat right now," Gilgeous-Alexander said. "I'm not shooting the greatest from the field, but trying to get to the free-throw line."

The Thunder have lost two consecutive games and five of their last six.

A pair of Spurs -- Jakob Poeltl and Jeremy Sochan -- left Saturday's game with quad injuries and are not expected to play in Wednesday's game.

With those two out, San Antonio waived Jordan Hall and signed Alize Johnson to bolster their frontcourt.

The Spurs' Josh Richardson has missed the last three games with a sprained right ankle while Keita Bates-Diop missed Saturday's game with an ankle injury.

Wednesday is the lone home game in an eight-game stretch for Oklahoma City. The Thunder begin a five-game road trip Saturday in Minnesota.

For the Spurs, it's the only road game in a seven-game stretch.

Wednesday's meeting is the first of three this season between the teams. The Spurs won three of four last season.